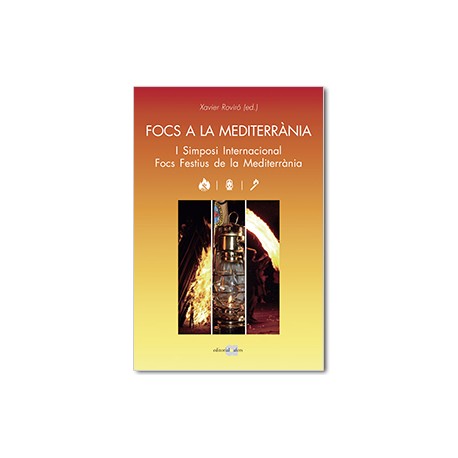 Fires on the Mediterranean contains the speeches, communications, presentations and conclusions of the first symposium on the ‘Focs a la Mediterrànea’ held in Vic the 27th and 28th of May 2016. The intention is to open the door to other annual meetings to discuss the festive fires in the Mediterranean. Reus has taken the relief and organised the 2nd symposium in May 2017. This volume is intended to be a testament of the importance of fires as a festive element and as a profound significance of Catalan culture and all cultures of the Mediterranean. It is worth mentioning the variability of manifestations that the fire presents, as well as the great vitality and popularity of customs around it and its function, as cohesive and as a symbol of peace, language, culture and celebration. People who celebrate with fire the solstices is a cosy, rooted people who love the land and hope for the future.
This book contains the texts presented at the I international symposium ‘Focs a la Mediterrànea’. The symposium was part of the proceedings celebrating the fiftieth anniversary of the arrival of the ‘Flama del Canigó’ to the Principality of Catolonia and to Vic, organised by Trdicat (the cultural association that promotes the flames of Canigó in Osona and Ripollés). The initiative was supported by the Council of Vic, the Department of Culture of the Generalitat of Catalonia, Ramon Muntaner Institute, Òmnium Cultural, the Diputació of Barcelona, the International committee of the Focs de Sant Joan, Barcelona’s town hall, the regional council of Osona, the Fallaires of Andorra, the Carrutxa, the Federation of Foguerons of Pobla a Gràcia, the University Vic-Central of Catalonia, the University of Barcelona, University of Lleida, the Historical Archives of Valls d’Àneu, Folkloric research group of Osona, the sponsorship of Studies from Osona and Vic Excursionists Union. One of the purposes of the symposium was to show the great diversity of manifestations in the Mediterranean around the element of fire. In addition to the four papers and the twenty-seven communications, the book brings together the presentations of each section, the conclusion of the debates, and a poem about the fire as an anthropological element by the poet Lluís Solà.