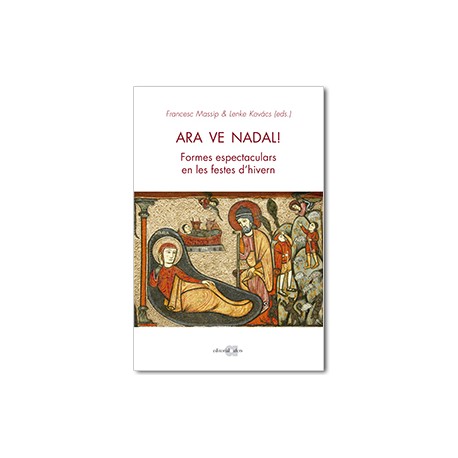 Christmas is coming! Spectacular forms of the Winter Festivities collects a series of studies on the festive activity that since the middle Ages has generated the celebration of the birth of Christ throughout Europe. In this book we gather the university research with the traditional culture, the research experience, and we find significant samples of popular manifestations – lyrical, liturgical or dramatic – on the Christmas theme. The shepherds deserve special attention, when it has fulfilled the centenary of the most represented (those of Josep M. Folch i Torres), which continue to be done throughout the country with an undeniable vitality thanks to the enthusiasm of the collectivity, the validity of the combat between good and evil that is often emphasised with references to the present more disappointing or demanding, the traditional techniques of acting and scenic, the strength of live music and the expected ‘carobs’ or ‘cuplés’ with which it is alluded critically to the present, from evictions to the crisis of refugees, through political prisoners of unfair exiles.

When today the idea of Europe is being questioned, undoubtedly perverted by the non-solidarity action of the state governments became acolytes of the economic powers and worshippers of financial system which they serve, it is forgotten that more than a thousand years ago we shared a spirit and a culture that, among other strengths, has Christmas as a festive axis of remote roots. And it is that Christmas is a key moment in the European calendar: be as an atavistic agricultural holiday in the environment of the beginning of the cold season, either as a Roman celebration of the birth of the Undefeated Sun that took the place when the duration of the light begins to increase the day following the winter solstice, as the date when Christianity strategically places the birth of its divine hero. On the occasion of this event, during the medieval and post-medieval period, a thick ceremonial fabric was developed with festive manifestations that often included ritual and/or scenic action, and in the environment of which the population gathered to strengthen their convictions, their walk together, their identity and belongings. This tradition has kept its strength until today with canturel·les, representations of the birth of Christ, adorations and living nativities scenes, and particularly with the annual function of the shepherds, a traditional show that is still a space of sociability, of reaffirmation of the communitarian links and of theatre school: not in vain have emerged from this practice professionals of first rank in all the fields of the dramatic creation.

Fracesc Massip is a scholar on history of the Catalan theatre at the university Rovira i Virgilli, author of thirty books and hundreds of articles in the main languages of Europe and America, particularly about the theatre and dances of the medieval and renaissance, as well as aspects related to folk theatre and folkloric traditions. Among other publications, it is worth mentioning La Festa d’Elx (1991), El teatro medieval (1992), La ilusión de Ícaro (1997), A cos de rei (2010), Those Dark Ages Revisited (2014), or in collaboration, La dansa dels alters (2017).

Lenke Kovács is a doctor on Catalan philology by the University Rovira i Virgil with the critical edition of the Consuetes mallorquinas de la passion de Cristo (2013). She has written articles and reviews in different European languages about theatre in the medieval and modern times. She is currently teaching at the Universitat de les Illes Balears and is the General Secretary of the Societé Internationale pour l’étude du Théâtre Médieval.