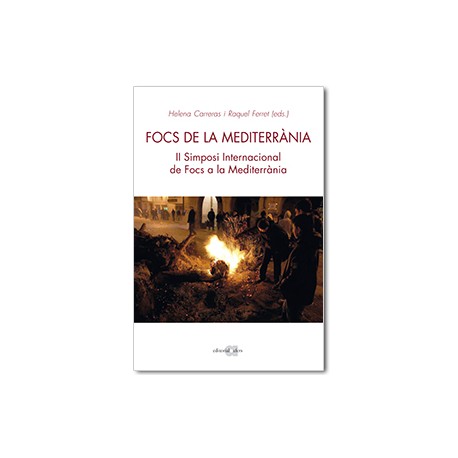 Fires on the Mediterranean collects the different interventions on the II International symposium on the ‘Focs Festius a la Mediterrània’ that took place on the 26, 27 and 28 of May in Reus, capital of the Catalan culture in 2017. The symposium, organised by the Centre for Heritage and Memory Documentation / Carrutxa, received the collaboration from the Department of Culture of the Generalitat of Catalonia and the Council of Culture of the city of Reus. This initiative was dedicated to the fire of the winter festivities and, in particular, to the feast of Saint Anthony, with clear desire to pose in value this rich intangible heritage.
The importance of a collective work like this is founded on the gathering a set of knowledge that interconnects a series of local festive practices, especially those linked to the winter cycle. The book includes several researches on the festivals where the fires is the protagonist, the twenty-five interventions presented on the II International symposium on the ‘Focs Festius a la Mediterrània’, as well as the conclusions. It reflects the richness of the festive manifestations that have the fire as a central element, considering it a point of union between the Catalan culture and the Mediterranean peoples. Sharing practices and rituals, regardless of language, culture or the festivities, is an ideal opportunity to make know different festive experiences around fire rituals, so relevant to popular culture and so present in many of Catalan traditions and neighbouring countries. The fire plainly shows this purifying, hospitable side, which abolishes borders, and shows the cultural roots of the peoples who practice this tradition.