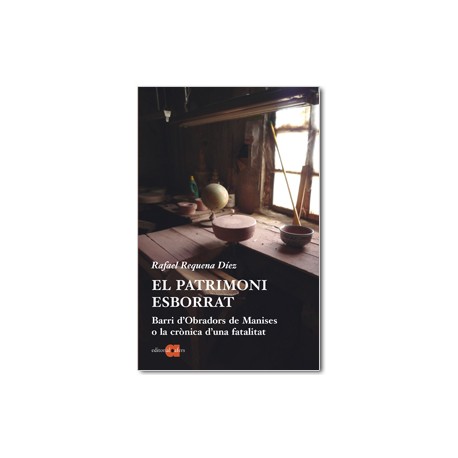 The Valencian Country has seen how its cultural heritage has been unprotected in many areas for years. In many cases, it has undergone aggressions and destructions on a path without return, that is to say, without recovery possibilities. A good example of this poor policy regarding the conservation of valuable heritage is the case of the workshop’s neighbourhood of Manises, which sadly disappeared as a result of one of the main modern threats to heritage: the belief that progress moves forward if it goes hand to hand with a predatory urban planning. The work by Rafael Requena is strongly informative and exemplary: It is the chronicle of a destruction of the historical industrial heritage that submerges the reader from the first page. It conveys an increasing concern that lets the reader know that it will finally give way to the story of a defeat that could well have been avoided. It is also perfectly illustrative of what the intense cycle of real estate economic expansion in Valencia (1995-2007) has meant for the destruction of cultural heritage. The case of the workshop’s neighbourhood of Manises shows that if the willingness of the politicians with power matches the craving ambitions of the owners of tile and cement, the risk to the heritage increases exponentially. If this alliance is firm and it also relies on absolute majorities -as in the case of Manises- the danger is higher, and a whole neighbourhood which used to witness the activity of historical ceramics ends up being a huge plot of land. The problem does not disappear because we are now facing an archeological site, and in a crisis context that has stopped the predatory projects.The most worrying thing is the fact that very little can be done when a large part of the citizenship falls into the trap of the speculators. In a conformist way, almost submissive with the help of official manipulations, neglects their common legacy and behaves with absolute unconsciousness. The responsibility for the destruction of the heritage is then well distributed.