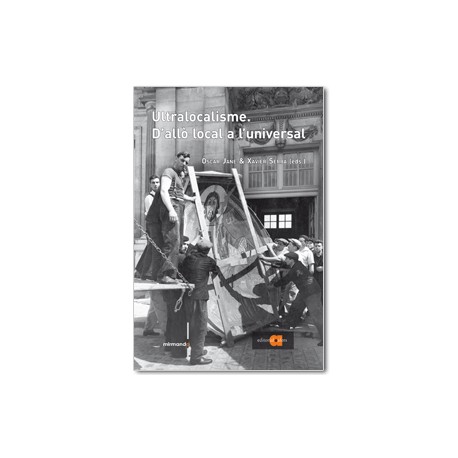 From the (a)border to the ultralocalism: ultralocalism is a natural step in front of  the boutique cosmopolitanism and the banal uses (mystified) of the new concept of "globalization". We don't even want to talk about the unfettered localism. It is a position that no one defends. The mental closure in a limited, arcadic space would now be a counterfeit and unsustainable exercise if it didn't happen in literary fiction. Then, what is the ultralocalism? Or more specifically,  what does it want to be? The theoretical reconstruction of a present, of a "universal" space that takes advantage of "virtues" too often underestimated. A "universalism" without concealment, without deforming bandits, without geopolitical interests, without "too local" hierarchies that have been acritically accepted as an non plus ultra of "cosmopolitan" modernity.  Barcelona —the myth of a capital— has been lost in its longings of cultural "grandeur", which denies an intricate and intense inheritance —but at the same time active and impelling— due to social marketing. However, long gone in the constructive imagination of the Barcelona elites is the idea of ​​a cultural whole constituted from the most prolific places in the territory. Perhaps Barcelona is destined to become a simple center for the distribution of merchandise, a pure logistical enclave. This —at least— is the idea that emerges from the politicians' discourse. Culture and many other things will not find —in these reception-expedition enclaves— a unique opportunity. Mirmanda proposes  to experiment from different territories and realities. Realities and territories absurdly cornered by the routine of the mass media and the pretension of cultural programmers. Oddly enough, in this world that is intended as "globalized", supposedly "outdated" political divisions constitute a prevailing and dangerous obstacle. Ultralocalism. From local to universal is a new proposal from the Mirmanda Group. It is a collective essay that from various angles exposes the idea of ​​ultralocalism just like a certain Dalí or a certain Deulofeu claimed a few years ago, among others: "We need to start from the local to access the universal”. Contrary to modern trends, the postmodernity of the product we offer here lies in the original and ideological rooting of universals. The authors of this volume are part of —in one way or another— a Catalan Mediterranean space. They analyze aspects, themes and characters from which both a local and a universal reading can be made. Myths and ultralocal medals bring new elements to the idea of the most transgressor ​​ultralocalism. The study of certain characters is the most obvious example of a universal ultralocalism. The periphery is erected in one of the neuralgic centers of creation and activism. The authors are Enric Pujol, Eric Forcada, Antoni Vives, Carla González Collantes, Xavier Serra, Paül Limorti, Jacques Rancière and Andreu Balent.