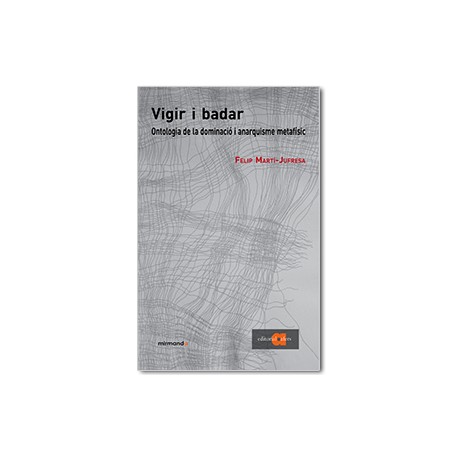 This book is composed by the articulation of three gestures. The first gesture is a theory of the being as an empire of legality: an ontology of the domination. The group of which this belongs to is thought as a relentless product made by a metastable and conflictive repetition, but constitutive of a hypercomplex normative network enough to breed the world. This ontology is a step towards the third gesture: a theory of the individual as a metaphysical anarchy. The individual is thought as the limit of a blinking and incomplete process of isolation regarding the being. This idea-limit is not a substance, it is the non-instituted term of an atheist kenosis, of an emptiness at the end of which no God, no Nature or no Emptiness exists. There is only an anarchy as a metaphysical fiction. The second gesture —a theory of the theory— is the unfinished mapping of the various ways in which you can go from the first to the third gesture. The theory is thought as the diverse and unruly set of methods whereby society makes the intelligibility of the dominant normative, and thanks to that, the freeing distance regarding what has been found about the individual is achieved.

The Mirmanda Group is a collective of reflection about matters than can represent a mainstay for the cultural and territorial development of society. It is an open and dynamic agora of two genres, of historians, of art historians, of architects, sociologists, philologists, economists, publishers, photographers, philosophers and many others who —coming from different parts of the territory— try to perform a  rigorous, scientific and practical work of the reflection of a country. The origin lies in the creation of the Mirmanda cultural magazine  which from the north of the country and since its creation in 2006 (www.mirmanda.com), brings up issues and debates of national and international interest. The employees of the Mirmanda Group work daily to cross borders with subjects that interest Sueca, Figueres, Barcelona or Perpignan as well as anywhere in the world. This collection is the result of a solid collaboration between the publish house Afers and Mirmanda.