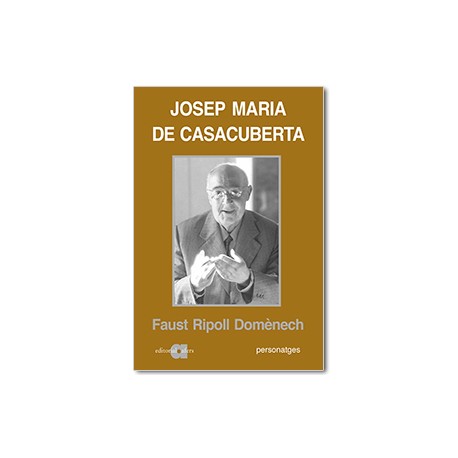 Josep Maria de Casacuberta i Roger (1897 – 1985) is known for being the founder of the Barcino Editing house, and especially, for editing the collection ‘Els Nostres Clàssics’ which has been well received for so many years and which has had an important role in recovering and spread our great writers. Casacuberta, however, is much more than just an editor of old texts, because through his collections (‘Col•lecció Popular Barcino’, ‘Enciclopèdia Catalana’, ‘Manuals Lingüística Barcino’, among others) he shows his will to give the Catalan culture of the necessary instruments to be a ‘normal’ culture, at the same level as any other nation of our environment. He is not just an editor – many times he was supplying what institutions couldn’t –, he is also is a scholar and activist from his years as a university student always paying attention to the Valencian Community, Balear Islands and the North of Catalonia. ‘Scholar doubled as a patron and a patriot’, as Joaquim Molas described him, Casacuberta invested all his life, without giving up, from the deepest discretion and with the help of his wife, Dolors Hostalrich, to begin the reconstruction of our common language and culture. In this moment of convulsion, filled with ideological changes and resignation, the example of his life experience and career is an incentive to keep fighting for the dream that many of us share.
FAUST RIPOLL DOMÈNCH (Alcoi, 1964) is doctor in Catalan philology by the Universitat Jaume I in Castelló. Nowadays, he manages the Servei de Cultura de la Universitat d’Alacant, where he is a linguistic technician. In 2010 he published in Afers Valencianistes en la postguerra. Estrtègies de supervivencia i de reproducción cultural (1939-1951) which won the XI Premi de la Critica de l’Insitut Interuniversitari de Filologia Valenciana, in the modality of Linguistic and Literary studies. In addition, he has published research studies about cultural valencianism of the postwar in different magazines, like Afers os Els Marges, or as a part of collective volumes. He is a collaborator of L’Espill, of which he is a member of the editorial council.