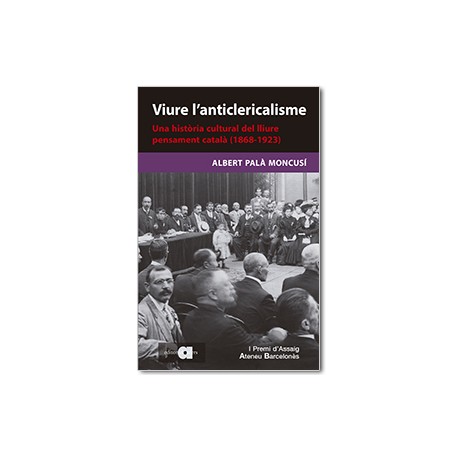 The Catalan free thought is one of the most unknown social movement in our contemporary history, even though it was one of the most important and influential during the Six-year term democracy (1868 – 1874) and the Bourbon Restoration (1874 – 1923). This book analysis it from a cultural history perspective and focuses on its organisational structures, on its permanent anticlericalism activities and on conjunction it formed with different alternative spiritualities and social and political movements. Masons, republicans, anarchist, spiritualists and, even, some protestants, theosophists or socialists took part somehow in the mixture of tendencies that integrated the free-thought movement. Personalities like Francest Ferrer i Guàrdia, Francesc Sunyer i Capdevila, Ángel López de Ayala, Amàlia Domingo Soler, Odón de Buen, Rossend, Arús, Anselmo Lorenzo o Josep Llunas i Pujals collaborated in the movement which offered them possibilities of actions inside the different political parties and of trade union or the privacy of Masonic lodges and spiritualist groups. In the frame of mostly Catholic society, freethought activism definitely helped to build new anticlerical identities which mobilised with multiple aims: fight the church’s influence in the education system and the feminine consciousness, build alternative worldviews to the creationism or secularize the rites. Obviously, they weren’t easy tasks and they generated a real ‘cultural war’ against the Catholicism which tried to maintain its dominant position. Rescuing these forgotten battles, allows the author to place the Catalan anticlerical analysis going beyond the cyclical episodes of violence that, often, have in a finalist way oriented its analysis.

Albert Palà Moncusí (Santa Coloma Queralt, 1979) graduated in history in the Universtitat de Barcelona with honours (2001) and did his PhD in contemporary history in the same university with a thesis about the Catalan free-thought (2015). He is a member of the Grup d’Estudi d’història de la Cultura i dels Intel·lectuals  (GEHCI) and has published research articles in history magazines like Afers or Cercles. He has, also, collaborated in several collective works such as El Franquisme a Catalunya (2005 – 2006) or L’Ateneu i Barcelona. Un segle i mig d’acció cultural (2006). Nowadays he is a professor of geography and history in the Rafael Casanova de Sant Boi de Llobregat Secondary School.