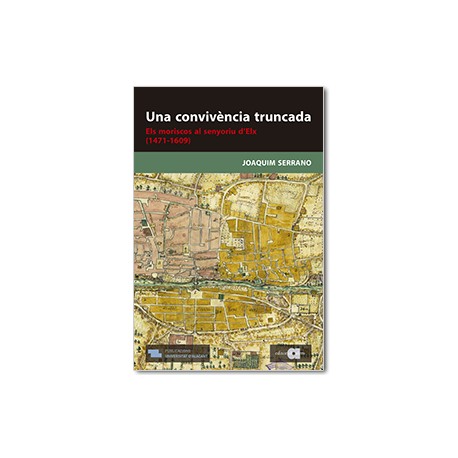 The Moorish community of Elche’s territory —the place of a feudal lordship in the past —is not well-known despite its economic, social and cultural weigh. Upon Moorish people —who were an important number among their neighbours—fell a series of prejudices linked with the images that constantly represent them in a biased way, and they are related with timeless conceptions attributed to ancient and Eastern worlds of uncertain accuracy. Through a microscopic analysis that covers all the 16th century, the author tries to guess who were, and what were the basis for their prosperity, which kind of relations did they have with the lordship, how and why were they persecuted and finally, deported. On the other hand, he investigates which kind of relation they had with the Christians of the Villa, with which they shared the land in which they lived in, and he clarifies how it was possible to cohabitate on a daily basis without causing great damages.

Joaquim Serrano Jaén (Elche, Baix Vinalopó, 1954) has been a teacher in a secondary school and a partner institution tutor at the UNED of Elche. Being a PhD in history, he has combined teaching research work with that of social history search —specifically about the Moorish minority— in which he has centered most of his works. The result of all of this is the publication of the book From patricians to bourgeois. The transformations of a landed oligarchy (Elche, 1600-1855) (Alicante, 1995) and various articles in magazines such as “La Rella” “L’Avenç”, “Estudis d’història agrària o Recerques” among others. His publicizing desire through the collaboration in a collective work called Documents for the history of Elche (from the Islamization to the end of the Ancient Kingdom) (Elche, 1998), Total eclipse of the sun in 1900 (Elche, 2000) or in the organization of the exhibition “Moorish of the South of València; memoir of forgotten people” (2009) need to be highlighted, as well as dissemination tasks through the Institut d’Estudis Comarcals del Baix Vinalopó, publishers of the magazine “La Rella”, of which he is a member of the editorial board.