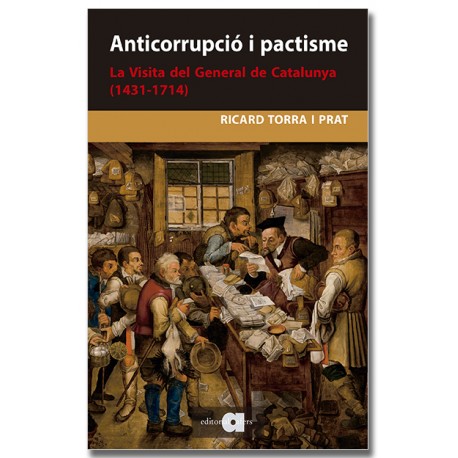 The Visit of the General of Catalonia was an institution that from 1539 to 1714 was in charge of controlling the behaviour of the members of the Generalitat of Catalonia and correct the corrupt ones. This book reconstructs their history, from it’s origins in the catalan Corts in the XV century until their supression together with the rest of the catalan institutions the year 1716, the relationships that it maintained with other political and jurisdictional powers of the modern Catalonia, it’s workings, the results of their inspections, the economy and it’s social composition.
In the Visit of the General two key ideas cooexisted that headed the title of this book: in one side «anticorruption», because the Visit chased with determination the illegal practices of the offficials from the Generalitat; on the other side «pactism», because the Visit, was the institution that best represents the idea of counterweight of one of the jurisdictional powers most relevant at the time: the Generalitat. In the end, across the Visit of the General of Catalonia you can see the complexity, vigilance and modernity of a political system, the catalan of the modern era, that in contrast to what some historians have exposed, made use from the juridical ordenances aproved in the representative assemblies the vertebral axis of their political community.

Ricard Torra i Prat (Sant Joan de Vilatorrada, 1989) is Alexander von Humboldt Fellow at the Ludwig-Maximilians-University of Munich and member of the team charged with the transcription of the processes in the catalan Corts in the modern era. He studied the course of History and obtained the Master’s degree in History of Catalonia at the Autonomous University of Barcelona. In this university he obtained a doctorate with a thesis dedicated to the Visit of the General of Catalonia, wich carried him to do a research study at the University of Warwick. He has published in diferent magazines of history, as well as having participated in diferent collective works. Nowadays he investigates the concept of political corruption at the lower medieval and modern Catalonia and the influence it had in the process of the creation in the modern State.