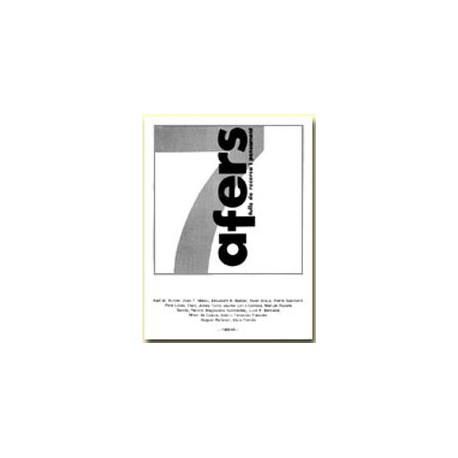 Karl W. Butzer, Joan F. Mateu, Elisabeth K. Butzer and Pavel Kraus: Irrigation Agrosystems in Eastern Spain: Roman or Islamic origins? (L'origen dels sistemes de regadiu al País Valencià: romà o musulmà?) The long standing controversy concerning Islamic diffusion of cultivars and irrigation technology to Spain is approached by comparing Roman and Islamic agrosystems at the general, regional and local levels. We describe the Roman intensification of the older Mediterranean agrosystem and then examine the subsequent agricultural and demographic decline between A.D. 250 and 800. The operation, organization, and evolution of large, intermediate, and small-scale irrigation are analyzed in seven case studies from the Valencia region of eastern Spain. The largest systems were refurbished in Islamic times, but during a period when Berber and Arab settlement was thin and acculturation of the indigenous populations incomplete. As a result, the Roman agrosystem and irrigation network remained largely unchanged, despite the presence of new technological features and cultivars. Later transfer of irrigation agriculture to the adjacent mountain valleys followed the Roman model, but with more Islamic elements apparent. Muslim agriculture in the area remained characteristically Mediterranean after the Christian Reconquest (A.D. 1238), and it survived largely intact into the present century, even after the Muslim expulsion in 1609. By focusing on the cultivars and the technology, as well as on the agrosystems as a whole, we are able to compare Roman and Islamic intensification objectively. They differed in degree rather that kind, with far more continuity thn change. Finally, we examine the processes of Islamic diffusion and indigenous adaptation.

Pierre Guichard: The «Berbers de València» and the delimitation of the Valencian Country  during the High Middle Age (Els «Berbers de València» i la delimitació del País Valencià a l'alta edat mitjana) This article is basically a response to the objections that the author’s theory on Berber ethnic contribution throughout the first islamization centuries of the Valencian Country has received. The objections forwarded by M.C.Barceló and M. de Epalza invalidate the relative frequency with which Berber elements in Valencia are mentioned in al-Ya‘qūbi and Ibn Al-Athir texts. The second part is devoted to the high Middle Age Valencian Country elimination as well as to the explanation of the toponym «Balansiya» by means of the oldest testimonies that reflect it.

Pere López Elum: Rural population and Valencian castle-life in the 14th century (Poblament rural i castellologia valenciana en el segle XIV) This work studies the non-relation between the rural population and the fortresses they used in case of danger, as it can be seen during the war of the two Peters. All along this war —and after it— the relation between habitat and its protection, which was modified after the conquest, was to be rebuilt, but the Christian population tends to be concentrated —not as the precedent Islamic residential disarray—, and that situation creates land limitation conflicts.

Jaume Coll i Conesa: Ceramics and Cultural Change in Medieval València. The impact of the conquest  (Ceràmica i canvi cultural a la València medieval. L'impacte de la conquesta) The cultural changing process in the Catalan-Aragon society during the 13th century as seen through the ceramics technological transference model is analyzed by the author. Starting with Sharq Al-Andalus’ functional and technological study of ceramic art during the Almohade era, a comparison with the Catalan-Aragon ceramic tradition of the 13th century and also with the later resulting tradition after 1238, is undertaken. An evident technological change, extrapolatable to other aspects of every-day life and chargeable to the absorption of highly skilled craft population along the annexation process of the future Valencian Kingdom is proven. This fact will provoke a technological transference between both societies, in particular from the subdued to the dominant one, which is the seed of the spiritual, technical and material development of the Aragon crown Kingdoms during the 14th and 15th centuries. In a parallel direction, ethno-archaeological methods for ceramic tool functional  studies are proposed, and so it is the use of a nomenclature which is nearer to the one used at that time by the analyzed society.

Manuel Ruzafa Garcia: The origins of a mudejar merchant family in the 15th century: Çaat Ripoll (1381-1422) (Els orígens d'una família de mercaders mudèjars en el segle XV: Çaat Ripoll (1381-1422) The Ripolls were one of the richest mudejar merchant families of the 15th century in the Kingdom of Valencia. This article traces down the origins of their fortune back from the late 14th century to the early 15th century, analyzing their genealogy—accurately reconstructed— and commercial affairs. The marriage linkage with a branch of the Abenxernit family in the beginning of the 15th century, brought the Ripolls into the very lucrative Mediterranean trade, raising them to the social leadership of the Valencian moreria thanks to their important relations with the Monarchy, in the very troublesome times of the fights between aristocratic factions in the city of València.

Ramon Magdalena Nomdedéu: Highlights on Valencian Jewish life from Hebrew sources: Answers of Rivash Isaac ben Sheshet Perfet (second half of the 14th century (Aspectes de la vida dels jueus valencians a la llum d'unes fonts hebraiques: les respostes de Rabí Yishaq Ben Séset Perfet (segona meitat del segle XIV) The author approaches the legal-religious life of the Jews through the use of an unknown material (until now), the «responsa» or answers that important rabbis sent to Jewish communities or to the leaders in order to solve moral, ritual, legal and other problems. In addition to this valuable information, the «responsa» provides us with several facts of sociological, philological, ethnographic and geographic scope which conform a new field of the 14th century Jewish life thanks to Rabbi Perfet’s answers.

Lluís F. Bernabé and Mikel de Epalza: Valencian Moorish in exile after their ejection in 1609 (Els moriscos valencians a l'exili després de l'expulsió del 1609) The authors analyze the consequences of the Moorish expulsion in 1609 and their arrival to Oran. These Moorish constitute a trend-setter group whose experience will be later useful for the rest of exiles. Starting with the initial spoliation that they suffered before they left the country and continuing with the great problems they had to comfort at Maghrib, the ejection ment the definite liquidation of this human group.

Antoni Ferrando Francés: Linguistic interrelations in the 13th century in València. Notes on Robert I. Burns’ contribution  (Les interrelacions lingüístiques en la València doscentista. Comentaris a les aportacions de Robert I. Burns). Linguistic Arabization of pre-James Valencian Society, presence of autochthonous Romanic speech during the 13th century, linguistic incidence of Medieval Christian re-settlement and Arabic influence over the literary structure of the «Llibre dels Feits» by James I of Aragon are the basic points analyzed by the author following the Jesuit Robert I. Burns’ work, which contains a great amount of useful opinions for the Catalan language historians, Especially those in the Valencian Country. The importance of the historians contribution of knowledge for the Linguistic History of the Catalan language is also pointed out, especially through Father Burns’ contribution on «The linguistic wall» between the Moorish and Christian populations

August Rafanell: The language of Valencians seen from Modern Age Catalonia (La llengua dels valencians vista des de la Catalunya de l’edat moderna) The present study gathers an important collection of Catalan opinions, written during the Modern Ages, about the Valencian language identity in terms of similarities or differences with the one spoken in Catalonia. On the one hand, it shows the ideologic irregularity of the testimonies and on the other hand, the impossibility of finding chronologic jumps in confirming the unity of Catalan language, though some cases may infringe this general idea. Language, obviously, takes part of national identity affairs and the forwarded opinions are a faithful reflection of it.

Lluís Fornés: Historical facts of the two great Catalan dialects  (Factors històrics dels dos grans dialectes catalans) For Valencians, language has been the conditioning factor of recent history. Disagreement is definite between the confronted groups when it comes to language and culture. The author suggests a viewpoint that breaks the «som valencians» (we are Valencians) against «som catalans» (we are Catalans) dichotomy and proposes historic, linguistic and other studies on the whole Central Romania area, also called Occitan-Romantic.