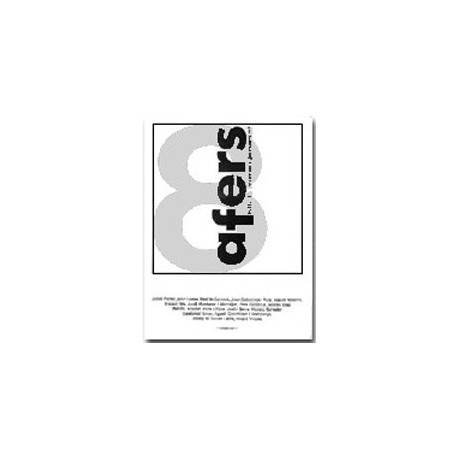 John Foster: Nationality, social change and class: transformations of national identity in Scotland  (Nacionalitat, canvi social i classe: transformacions de la identitat nacional a Escòcia) «The theory of nationalism constitutes Marxism's greatest historical failure». Over the past decade, this comment by Tom Nairn in his Break up of Britain has encouraged the belief that the marxist tradition has little to offer on the subject. Here the opposite thing will be argued. As in Nairn, the argument will be based largely on the history of the Scottish people, and unlike him, we will try to show that this history can only be understood by relating the content of Scotland’s nationality, and how it changes historically, to the dialectics of class struggle. This is how Marx himself sought to understand the concept of the nation and nationality. First, however, in order to isolate the specific contribution of Marx and the marxist tradition, we will examine the adequacy of some recent non-marxist approaches to nationality.

Neil MacCormick: Nation and nationalism  (Nació i nacionalisme) Our attachment to various forms of human community, and especially to national communities constitutes a personalizing element since it conforms a part of our own individual identity structure and allows every one of us to go beyond the categories of space and time. Patriotism, however, has to be completed with some other moral loyalties and, above all, with the idea of humanity and with the respect to individual rights. This will not be possible, though, while orthodox theory of nation, born in the late 18th century, which is substantialist and tendts to statalism, survives. From the starting point of some examples on Scottish history, the author wants to show the existence of a non-statalist conception of nation which, together with its political implications, shows its intrinsic moral value. From this perspective, individual rights and state rights complement and demand each other. And, on the other hand, it looks as the suitable way to follow for the future of the United Kingdom, as well as for the European Community as a whole.

Joan Colomines i Puig: Reflections on our national identity, today (Reflexions sobre la nostra identitat nacional, avui) Considering the existing debate between feeble thought —meaning «certainty»— and strong thought —meaning «possibility»—, the author examines the present thought crisis and the re-emergent nationalisms, centering his argument in the evolution of the Catalan case which is also influenced by those different word conceptions and by the double force/counter force game through which it has been progressing. Setting off from this analysis, the author wonders how Catalonia, and its national identity, should be understood today. The prasing of the answer is supported by every-day political realty in the search of an inevitable theoretical updating. He offers, finally, his personal version of the meaning that the 11th of September —Catalonia’s National Day or «Diada»— has at the end of the 20th century, subject that motivated the lecture here introduced.

August Monzon: Valencian society and national matter: regarding “De impura natione” (Societat valenciana i qüestió nacional: a propòsit de De impura natione) The sociologists Damià Mollà and Eduard Mira are the authors of the essay De impura natione. El Valencianisme, un joc de poder (Valènica, 1987). The main idea of the book supports the differentiated national stand of the Valencian Country in front of Catalonia, though keeping linguistic and cultural ties alive as its sole possibility of collective reconstruction. All of this claims for a review of the present status quo —an artificial «Valencian Community» designed from the starting point of a purely factic consensus among the political parties of state ambit, lacking a real public debate — and also the «orthodox» national concept —pancatalanist— of the progressive intelligentsia, unable to reach social support due to its symbolic and emotional —popular— deficit. The authors set forth a specific Valencian National way, from the starting point of a dialogue and pact between catalanists and anticatalanists confronted positions, as an alternative. A typically postmodern —and interesting— model, filled with arising questions that should definitely be answered.

Gregori Mir: A comment on Harold J. Laski’s obsolescence of federalism (A propòsit de L'obsolescència del federalisme, de Harold J. Laski) The author analyzes the paper by Harold J. Laski, «Obsolescence of Federalism», appeared in The New Republic i 1929. In that paper, Laski approaches the subject of North-American federalism from a marxist point of view of social analysis, considered by him as the only valid way of interpreting reality; economic difficulties —the post ‘29 recessions— and social/political difficulties —emergence of fascisms— made him consider the end of the democratic system. Laski’s placement, traceable along various of his works is, still today, a fundamental reference in order to understand North-American federal system critical evolution —and not only that. The studied paper —reproduced for the first time in Catalan translation— forces the author to question himself about the feasibility of federalism as a model for state configuration in Europe nowadays, considering its vertiginous changes. His conclusions are that, even from a position different from Laski’s and referring to the social-political Catalan area lato-sensu, federalism is, today, a very obsolete system.

Jordi Montaner: Nationalisms in the Soviet Union: the case of the Baltic Republics (Els nacionalismes a la Unió Soviètica: els Països Bàltics) In this article, the author points out the highlights of the situation in the Baltic Republics after Mikhail Gorbachev's rise to general secretary of the Soviet Union Communist Party in 1985. The democratic process started by ‘perestroika’, and ‘glasnost’ has taken USSR’s different nationalities to put forward —with more or less strength—their claim for national rights. The author summarizes three main types of problems that affect the Soviet Union: 1) The cultural, ethnic and lingüistic ones 2) Economic relations between the center and the periphery and 3) National-political matters, of great importance in Estonia, Latvia and Lithuania. After pointing out the roads followed by the three republics, the author closes with a reference about the will of these countries for the constitution of a community of states in the Soviet Union, inspired in the European Community.

Pere Santonja: Presence of nature and stoic influence in Pedro Montegon’s «Eusebio» (La presència de la naturalesa i la influència estoica en l'«Eusebio» de Pedro Montegón) The relations and similarities between Pedro Montegon’s «Eusebio» and Jean-Jacques Rousseau’s «Émile ou l’éducation» —both written during the 18th century Enlightened period— are undoubtedly more than purely formal. The stoic theory, on the one hand, and a certain pre-romanticism on the other hand, are equally present in both works. The author of this paper presents, from this starting point, an appealing vision of Montegon’s work, placing it in its era and relating it with the dominant ideology and literary currents, especially, for obvious reasons, with those of French Encyclopedia

Andrés Díaz Borràs, Anaclet Pons Pons and Justo Serna Alonso: From landing stage to sea port: an unsuccessful project of the Valencian ‘Junta de Comerç’ in the “Ancient Regime” crisis (1792-1797)  (De desembarcador a port: un projecte fallit de la Junta de Comerç de València en la crisi de l'Antic Règim (1792-1797) The present paper tries to deepen in a subject that the authors had already studied before: the building of Valencia’s sea port. Thanks to an institution of Borbonic origin —the ‘Junta del Comerç’— the lack of a sea port will be intendedly overcomed by means of two mechanisms: undertaking the elaboration of an adequate technical project, signed by the engineer Manuel Miralles, and collecting the necessary financial resources. All in all, this project was to suffer a good number of obstacles due to institutional conflict and administrative irregularities. Those problems were certainly concentrated to a good extent, in the antagonized stands that the engineer and the local institution —that initially supported him— held. The problem in this case is one of scope, of field dominance, and it is typical of an «Ancient Regime» an Absolute Monarchy situation. A deep technical matter has to be added to all this: physical shaping of the Valencian shore and the problems involved in it.

Salvador Calatayud Giner:  Cereals and Valencian agrarian specialization, 1870-1930 (Els cereals i l’especialització agrària valenciana, 1870-1930) Despite outstanding specialization improvements in commercial farming, Valencian agriculture lived an important presence of cereals at the beginning of the 20th century. The end of self-sustenance of small farmers was not, then, a fast process: cereal and mainly market production grow together in the same land, not necessarily meaning opposition to progress. This paper tries to quantify the superior profit of Valencian cereals as compared with other parts of the Spanish State, as well as it seeks to show the variety of farming systems developed in central areas of the Valencian Country, as far as grain is concerned. This variety leeds to a scarce technical homogenization and to outstanding differences in yield or final output which were especially evident between non-irrigated and irrigated land.

Agustí Colomines i Companys: C’mon! C’mon! (Life and social welfare i Barcelona during the second half of the 19th century) (Amunt! Amunt! (Vida i benestar social a la Barcelona de la segona meitat del segle XIX) This article —a summarized version of the second chapter of the work Les vespres republicanes a Barcelona: creixement urbà i mentalitats públiques, 1868-1874 —, has its aim in evaluating the life situation of the Barcelona working class and the bigger or smaller influence that the modern industrial movement had on Barcelona’s social welfare during the second half of the 19th century. Barcelona, Catalonia’s capital, was at that time a city in transit towards modern life, beating its own rhythm —political, economical and class wise— in the context of a still very rural Spanish State, and with some social challenges to cope with. Attitudes and class confrontations are, therefore, herein analized.

Josep M. Solias i Arís: Reflections on industrial archeology (Reflexions sobre arqueologia industrial) This paper aims to be a reflection about a subject which is still under formation in our country. This thinking is undertaken from a border-line point of the matter —industrial Archeology, in this (case-since) the author is not at the moment developing an active research task but working along one of its margins: recovering and spreading the knowledge of the heritage, in general, from the starting point of a local administration. This point of view entitles us to reach a series of aspects that might escape a professional which is directly studying a specific topic. Confronted hands out a handful of problems that he detects in developing his work and that, in that sense, worry him.

Ricard Vinyes: The most gigantic utopia (La utopia més gegantina) Gramsci characterized religion as «the most gigantic utopia appeared in history». Setting off from this assertion, Ricard Vinyes analyzes the religious problem in this author, for whom, unlike other orthodox marxists, religion is the necessary condition in order to reach a fair society, even though this fact could become its exact contrary. Such intellectual stand took him to a dialectic confrontment with Croce, which this article’s author collects and evaluates without forgetting the political implications of that debate on Italy’s situation at that time. For Vinyes, Gramsci’s interest in religion lies on the fact that this «utopia» had positively emerged as a mean of sustaining social unity, preventing the final separation between intellectuals and «simple souls»