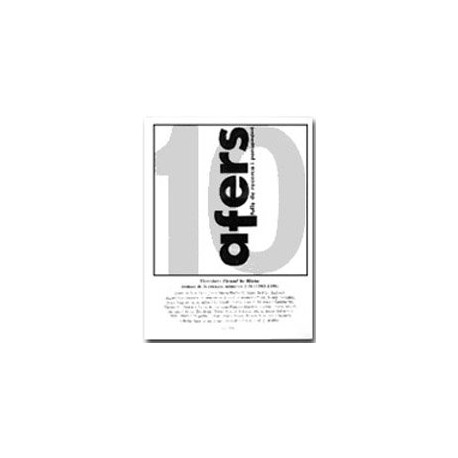 Albert G. Hauf i Valls: An introduction to the dossier: Tirant lo Blanc with an inverntory of Tirant’s commemorations (Introducció al dossier: Tirant lo Blanc. Amb un inventari-epíleg de les commemoracions tirantianes) On the occasion of the celebration of the 5th centenary of the publication of Joanot Martorell’s novel Tirant lo Blanc, published in Valencia in 1490, the author reports all the performances, congresses, editions… that too place throughout this year. He also presents the articles forming the dossier on this commemoration prepared by Afers. Fulls de recerca i pensament.

Joan Bada i Elias: Abortion and prostitution in Catalonia, 1850-1907 (Avortament i prostitució a Catalunya (1850-1907) Women working conditions in Catalonia during the second half of the 19th century and the first years of the 20th century, the endemic environment, the scarcity of wages, the economic misery, the deficiencies in their education and training, the hard labour conditions and the validity of a system of values based in a double sexual moral are the items studied by the author, and they are in relation with the motivations that leaded the women to abortion and prostitution. He also considers moral and scientist opinions of the contemporary authors as well as the different laws promulgated on these subjects

Joan Fuguet Sans: Marian Sanctuaries of the Temple’s Order in Catalonia (Santuaris marians de l'Orde del Temple a Catalunya) Despite of having been related in any time with Templars, just by tradition (Santa Maria de Paret Delegada and Santa Maria dels Angels d’Horta) or by some scholar (Santa Maria de Bell-lloc), nobody had studied yet the prior Sanctuaries as Templar’s architecture. The exhaustive analysis of the existent documents leads the author to set Templar filiation or at least the relationship of the three sanctuaries with the Order. This link can be easily appreciated in the case of Paret Delegada and l’Horta. The controverted question on the hospitable practice of the Templars in the Crown of Aragón can be explained from the service they provided to the communities of donated children related with the Order. Anyhow, the whole concern must be understood in the context of our scarce knowledge we still have on the questions regarding donated children situation in the end of the 12th century and the beginning of the 13th century.

Ferran Sagarra i Trias: Barcelona in expansion: the 1857 Miquel Garriaga i Roca’s urban model (Barcelona en expansió: el model urbà de Miquel Garriga i Roca de 1857) The transformation of Barcelona in the middle of the 19th century is one of the remarkable events in the European urban development of that time. The «enlargement» of Barcelona built according to the traces set by Idelfons Cerdá is nowadays a favoured sector of the capital of Catalonia. The articulation between the new town and the old one was a matter of debate in the years prior to the approval of the Cerda’s Plan (1859), during the drafting of the base defining the changes in town-planning. Once approved, this discussion came into light through the municipal promotion of a plan made by the architect Miguel Garriaga i Roca, who reformulated Cerdá’s plan. The town projected by Cerdá was a finalist model of the rational town that did not consider the transition from the existing situation to the future one. The old town either had to merely disappear or it had to homologate with the new town.

Ernest Sànchez Santiró and Ximo Revert Roldan: An architecture for Science. The Faculty of Sciences of the University of València (1909-1944) (Una arquitectura per a la ciència. La Facultat de Ciències de la Universitat de València (1909-1944) The conception and construction of the building of the Sciences Faculty of València allows us to see the evolution and changes in the idea of university education. Along the first third of the 20th century, the practical edge of teaching becomes consolidated in order to face the whole demands and innovations in some peculiar sectors of the capitalistic Spanish economy, some of them (adobes, varnishes, tints, fertilizers, drugs…) being vital for Valencian economy. The «Temple of Science» envisaged by the ruling classes of the Country in 1906, besides solving both a pedagogic and a research problem in the reduced university world, will serve to cover the lack of professionals in the most fields of sciences and industry suffered by state economy in general and in the one of the Valencian Country in particular.

Vicent Simbor: From “el cuento del Dumenche” to “El conte del diumenge”: 80 years in search of the Valencian narrative (De El Cuento del Dumenche a El Conte del Diumenge: 80 anys en cerca de la narrativa valenciana) El conte del Diumenge (Sunday tale) is a booklet of short stories written in Catalan, and it came to light in 1988. This date is relevant because El Cuento del Dumenche, the first publication of this kind, was created in 1908, just 80 years before. Since then, all short novel collections that were developed influenced the narrative evolution in the Valencian Country. The main linking trait among all the persons concerned is their aim to create a «Valencian narrative». In this article, the author reviews all these publications and analyses its objectives and the means employed to implement them. He does not forget the linguistic problematic involved in the conflicts between orthographic and grammatical normalization and the accessibility to the popular class illiterate in Catalan. He also studies the published works from a narrative point of view, underlining the ones that show a more progressive will over the ones that followed anchored parameters

Agustí Colomines i Companys and Vicent S. Olmos i Tamarit: Afers. Fulls de recerca i pensament. A journal from the Catalan Countries. Index for the numbers 1-10 (1985-1990)  (Afers. Fulls de recerca i pensament. Una revista valenciana dels Països Catalans. Índexs dels números 1-10 (1984-1990) The authors reflect on the production of journals of research and thought in the Catalan Countries and on the present situation of Catalan publishers. They also focus on the use of Catalan that besides the increase of its presence in the last years, is still in minority regarding Castilian. That is due, mainly, on one hand to an institutional and university policy that has not offered the required support to this language. On the other hand, there is also a lack of interest among a great part of the researches, mainly in the Valencian Country. They present the index of ten first volumes of this journal founded in 1985 under the direction of the late professor Sebastià Garcia Martínez (1942-1986) that has become a Catalan periodical publication generally acknowledged by both academic world and the public in general.

Núria Sales:  Do Mabillon, Dom Lobineau and the P. Villanueva: were they non-historians? (Dom Mabillon, dom Lobineau i el P. Villanueva: una no-història?) The «mauristes» (French Benedictine scholars from the 17th and 18th centuries) were good not only at paleography hagiography or patristics. Therefore, they can not be conceived as a bundle since some of them did obey all trends and instructions from above while some others did not. In the 17th and 18th century, the government wanted the historians to confirm the continuity if the Frankish-to-French kings sovereignty in Bretagne, Burgundy, Lorraine...Some of the «Histories des provinces» they wrote are nearly retrospective genealogical guides and most of them focus on the King (or Duke), Church and nobility. But Dom Lobineau’s Histoire de la Bretagne does not forget both serfs and peasants. Dom Morice’s Histoire Ecclésiastique et Civile de la Bretagne and Device and Vaissète’s Histoire Générale du Languedoc although often ignored or overlooked, are nowadays indispensable. Today’s historiographers are particularly indebted to J. Villanueva and his essential «Viage literario por las iglesias de España». J. Riera i Sans in Calls, does justice to this great Valentian friar, from the late 18th early 19th century, who was neither a «bollandist» nor a «maurist»

Josep Fontana: Against unanimity (Contra la unanimitat) The author develops some ideas on the historiographic and political aspects of Josep Benet’s book on the exile and death of Lluís Companys, President of the Generalitat of Catalonia (1934-1940). He comes to the conclusion that studying the problems of our recent history is the best way of setting up a collective consciousness that allows us to live in peace and to improve jointly without false unanimity— that are unable ina normal and healthy society— but with harmony, because our survival as a country will never be put in danger again.

Joan Colomines i Puig: The prevailing utopia of J.V. Foix’s catalanism (La utopia, vigent, del catalanisme de J. V. Foix) Far from being a visionary, J.V. Foix was a sensitive man to ordinary life. He was also responsive to the call of the native land as a beautiful utopia. This utopia was kept in Catalonia during the hard times when the own national identity was to be defended through a coherent moral and civic attitude. Certainly, Foix did combine political ideas with vanguard movements mainly from abroad: Marinetti’s futurism, Maurras order and the intellectual level of Action Française.

Carme Plaza Arqué: Pendulum’s semiotic (La semiòtica del pèndol) Besides its literary values, Umberto Eco’s second novel Foucault’s Pendulum, provides a set of semiotic reflections. As every work of art, a novel cannot be judged in absolute terms. Both critics and amateur critic readers use to coincide in their judgements specially when there are very good or very bad works involved. The other valuations depend on a set of factors such as: the liking for the subject, elective affinities, knowledges and above all, the state of mind of the reader. This does not mean that a novel or whatever work of art must be understood in a  different way according to the tastes of the receiver. There are some constant relationships between the work (the author so to speak) and the reader that can be structured ina multiform and complex set but admitting different levels of interpretation.