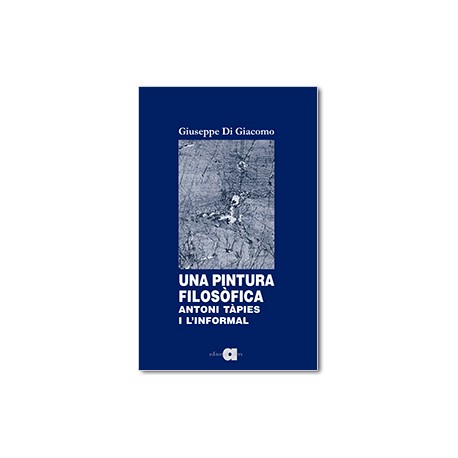 The work of Antoni Tàpies plays an essential role in contemporary art, both in itself and for its philosophical implications. Undoubtedly, his work can be defined as a "philosophical painting" characterized by a constant research of the matter, and it is treated as if it was a body that turns into flesh; a matter that has been hurt and fragmented, but it either turns into a manifesto of the transcendental or it shows the spiritual dimension thanks to Tàpies. Giuseppe Di Giacomo emphasizes that the greatness of this art, that at the same time is a "presentation" and "representation" of the matter, lies in the capacity to become fully, even in his perfect immanence, "spiritual art." The research on the subject of Tàpies and a whole generation of artists who lived during the Second World War brings them together under the so-called "informal" . This book sets up a dialogue between the art of Dubuffet, Fautrier, Wols and Burri with that of Tàpies, explaining the similarities and differences. In a world characterized by the total commodification of art, where the artistic value is identified with the economic value, the art of Tàpies is one of the few expressions in it. This allows him to be a great testimony to the brutality of the 20th century history. Giuseppe Di Giacomo is an Italian philosopher and essayist of international renown, Professor of Aesthetics of the University of La Sapienza, Rome. He has been the principal of the contemporary art museum that this university has. He has taken charge of the relation between aesthetics and literature and of the relation between these disciplines and the figurative arts. His most highlighted works are: Alla logica all’estetica. Un saggio intorno a Wittgenstein (1989), Icona e arte astratta. La questione dell’immagine tra presentazione e rappresentazione (1999), Estetica e letteratura. Il grande romanzo tra Ottocento e Novecento (1999, translated into Spanish and Russian); Introduzione a Paul Klee (2003), Narrazione e testimonianza. Quattro scrittori italiani del Novecento (2012), Malevič. Pittura e filosofia dall’Astrattismo al Minimalismo (2014, translated into Russian), Fuori dagli schemi. Estetica e arti figurative dal Novecento a oggi (2015, translated into Spanish), Arte e modernità. Una guida filosofica (2016), Una pittura filosofica. Antoni Tàpies e l’Informale (2016) and Nietzsche e l’eterno ritorno (2016).