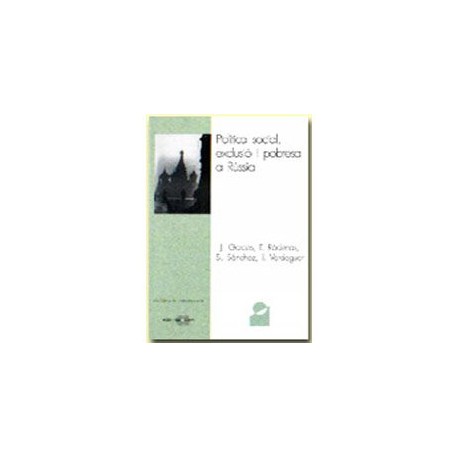 Over the 20th’s century, Russia has been the center of international politics: during the Revolution of 1917, the Second World War, the Cold War and nowadays, as a consequence of the changes that have been triggered since the fall of Berlin’s wall. At this time, the images coming from that country —without taking into account the tricks made to obtain or to maintain the power that is characteristic of the Yeltsin era— are far from encouraging: the Russian citizen feels economically and ideologically defrauded, and his/her hopes for a change regarding the material situation fade away —the political and economical corruption become normalized, etc—. We only have to take a look back on history, economy, internal and external policy, the defense, the ecology or the social exclusion to appreciate a very sad and collapsed picture that has left-wing the population without any expectatives. In this sense, the essay Social policy, exclusion and poverty in Russia is much more than relevant, as it offers an up-to-date view about the poverty phenomenon and the segmentation of Russia at the end of the 20th century. Regarding the explanation of the crisis of the Russian society, this book explores economic, sociological, political and historical variables while analyzing the social dualization and strategies that —from social policy and the social services system— are attempting to alleviate poverty.