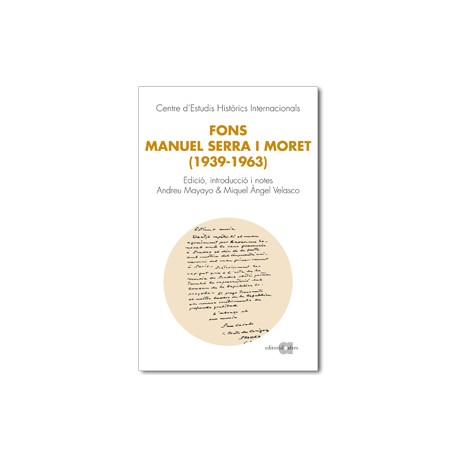 Manuel Serra i Moret’s personal collection, guarded at the Centre for International Historical Studies of the Pavelló de la República, is composed of thirty boxes structured in six blocks: correspondence, personal papers, writings, press clippings, political charges and bibliographical collection of 158 works. 1939 is considered to be the start of the collection, although there are previous documents, mainly personal and identification ones. The correspondence configures the documentary body and is divided, according to the origin and destination of the 3,062 letters, in: institutional, political organisations, entities, editorial and magazines and personal. The files corresponding to the political positions of Serra i Moret are very interesting for the researcher: Council member of ‘La Generalitat’ (1946 – 1947), Minister of the republic in exile (1949 – 1950), and two controversies: the presidency of the Parliament of Catalonia (1950) after the death of Antoni Rovira i Virgili, and the revindication of the presidency of ‘La Generalitat’  (1954), after the resignation of Josep Irla, an episode known as ‘Serra i Morat case’ that caused a real earthquake in Catalan politics of exile and culminated in Mexico with the election of Josep Terradelles as president. The book proposes a vision of the whole by means of the transcription of several articles published in press, unpublished texts and fifty letters. These have been chosen according to the political or social relevance of the correspondents and their knowledge on the part of the general public, or according of the interest of the subject and the dissemination of little known episodes, such as information from people of the interior in contact with Serra i Moret, the escape of Nicolás Sánchez Albornoz de Cuelgamuros (1948) or the actions initiated when the arrest in Barcelona of Joan Comorera was known (1954).