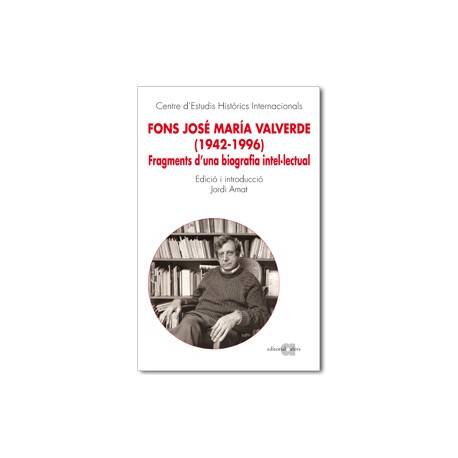 José María Valverde Pacheco (Valencia de Alcántara, 1926 – Barcelona, 19996) is a prominent figure in the Spanish literature of the second half of the 20th century, one of the most recognised high-culture disclosers of the post-war period and one of the most interesting Catholic poets of this period. Brilliant University professor and man of integral letters, his vocation as writer was forged in the cultural model of the nation Catholicism. During the first years of its trajectory it was a prized value of the cultural society controlled by the tentacles of the dictatorship. Throughout the fifties, however, while remaining true to their roots, he made them transcend in a process that would lead him to become an intellectual dissident against the regime. In the year 1965 renounced the chair of aesthetics to sympathise with a group of colleagues expelled from the university, a gesture that forced him to leave the country. From this moment, his commitment approached him militarily in proposals of ideological radicalism. In the last years of his life, when he returned to Barcelona, he became one of the writers of reference of the letters of democracy. During his long and fruitful career as a teacher and writer, José María Valverde accumulated a remarkable amount of documentation and heterogeneous related to both his literature and his intellectual biography. These materials constitute the José María Valverde collection, guarded by the Centre for International Historical Studies of the Pavelló de la República from 2001. The life and work of Valverde can be reconstructed and analysed studying the twenty-eight boxes that constitute a well catalogued background, which contains from materials of the prehistory literary of the poet Valverde of the beginning of the 40s until the testimonies public and deprived of the impact that caused the death of one of the most respected men of the Spanish culture of the second half of the 20th century. From unpublished manuscripts to editorial contracts, to reading notes or newspaper clippings, the collection is an invitation to pursue the evolution of contemporary Spanish culture with Valverde as pivot. The correspondence he maintained with figures such as Vicente Aleixandre, Pedro Salinas, Juan Ramón Jiménez, José Luis López Aranguren, Ernesto Cardenal, Gabriel Ferrater, Mario Vargas Llosa and Fernando Vater, among many others, are privileged minaret to know these opaque times in which the free expression of ideas was outlawed. Especially exciting is the admired reaction of his friends and acquaintances when he left the chair as a demonstration of protest against Franco’s regime. This book, which opens with a biographical profile of Valverde, pretends to be tasting to discover a collection of a great historiographic richness.