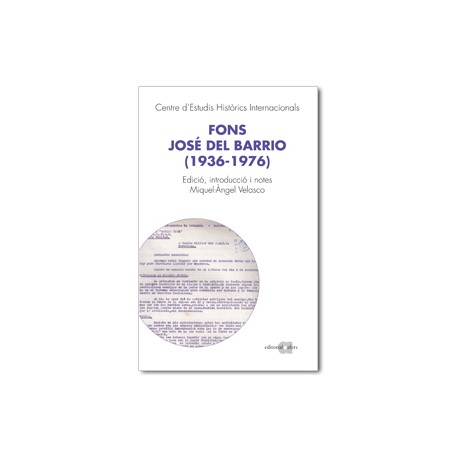 About to commemorate the 25th anniversary of the death of José del Barrio (1907 – 1989), the Centre for International Historical Studies (CEHI) wants to pay tribute to him by editing this new volume of the collection of ‘Els papers del pavelló de la república’. Following his participation in the international symposium on the Spanish Civil War, organised by the CEHI in Barcelona 1979, José del Barrio gave to the centre the documentation preserved by him during the Civil War and the exile. After his death, his wife and daughter processed the transfer from Paris of the numerous documents, which were catalogued and made available to the public in 1992. The book contains considerable information on the military operations developed in the chaotic front in Aragon, tales of Del Barrio’s memories of war and two ‘Memoirs of the headquarters of health of the XVII C.E’, authentic bibliographic jewels. There are also numerous photographs of the front and other snapshots of the political activity carried out by Del Barrio during the war, with his intervention in various rallies. The Documents of Political Organisation subseries is dedicated to organisations and political platforms, mainly from exile, with which Del Barrio associated, such as the Republican Anti-Fascist Movement of Hispanic Liberation (MRALH) or the Spanish Civic Union. Of the Socialist Action Movement (MAS), an entity he led, are preserved many documents dated between 1953 and 1962. In short, Del Barrio’s Collection contains important documentation to understand the convulsed framework of the Civil War and the exile.