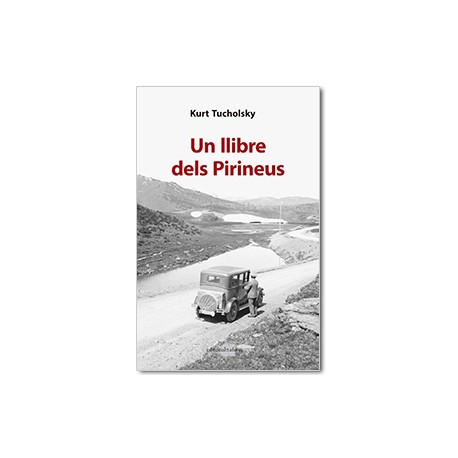 One of the most important essayists from the Republic of Weimar, Kurth Tucholsky (1890 – 1935) came from a well-off Jew family and he started to write early. He participated in World War I doing office work. With a short exception, he kept himself away from any political party in order to adopt a neutral critical perspective. His clear and relaxed prose and his excellent aim – specially against a Republic of Weimar so indifferent that kept the old military and judicial organisation – made of him in a feared and admired author. In 1923, he moved to Paris as a correspondent for the Vossische Zeitung and Die Weltbhühne newspapers, and for the German section of the Ligue pour la Défense des Droits de l’Homme et du Citoyen. Settled in Sweden from the 1930, with the arrival of the Reich in 1933 he stayed there in exile because he was accused of Jew, from the left, pacifist and antigerman. He died in 1935 from an overdose of barbiturate. In Catalan, so far there were only a selection of his journalists’ essays.
When he was settled in Paris, in 1925 Tucholsky travelled for two months to two places of the Pyrenees. He collected his impressions in Ein Pyrenäenbuch, published in 1927 under the pseudonym Peter Panter. Closer to literary and political criticism to the traditional travel book, it has been compared to Quadres de Viatges, from Heinrich Heine, and with Viatge Sentimental per França i Itàlia by Laurence Sterne. Tucholsky opted for a subjective, personal account. Similar to the journey H.A Taine did in XIX, the tour went from west to east, visiting the Pyrenees through Baiona, through Biarritz, Sant Joan de Peu de Port, Pau, Lorda, Andorra and other places, to finish in Albi with a beautiful tribute to the painter Toulouse-Lautrec. From the book, the chapter dedicated to Lorda stands out, where Tucholsky tries to take the mass religious phenomenon from different perspectives. By relating bureaucratic issues associated with crossing the French-Spanish border, he goes back to the topic of freedom of people’s circulation, because of World War I. When Tucholsky attacked the power in all his demonstrations, we can find topics like militarism and war, the court administration, politics and society, but also literature. The irony and humour can be found throughout the book. Reflexive, witty and entertained at the same time, he is characterised by the mixture and forms and studies: next to the essays there are descriptions of landscapes, towns or people; there are, also, the poem and the letter, clever notes and sarcastic jokes. The book is, then, representative of the author’s prose. Moreover, most of the topics treated here are still – or again – of interest.