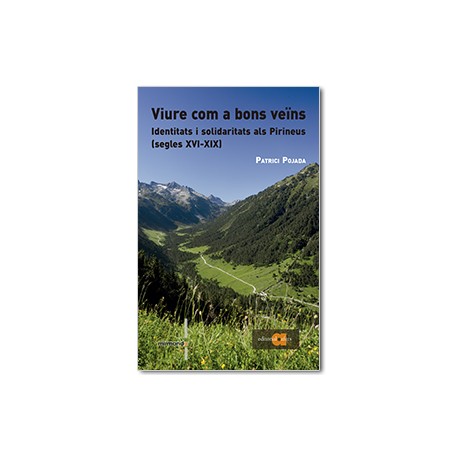 Were the Pyrenees a wall between different realities or a contact point, a place for meetings and exchanges among communities that shared many similarities? This essay reflects on identity and solidarity notions in the Pyrenees in an era in which the links between communities and fronteers were strong. The starting point is language, and the emphasis lies on the occitan-catalan relations. Indeed, to be someone from the frontier ment that you would be exposed to the dangers of the war. But the communities wanted to cohabitate. Peace was the necessary condition to live and practice the economic activities of the Pyrenees, such as animal farming or trading. That is how the treaties of leagues and "patzeries" (a figure of private law that allows various communities to share and enjoy a certain inheritance) that linked different sovereign valleys and that created almost neutral lands. Therefore, along with the local unrest, the violence between valleys and a strong "internal" identity, there was a real solidarity among fronteers. As well as that, between communities that were culturally and linguistically very close, external phenomena rose different identities in order to benefit the two big States that were being made. As a consequence, the frontier became more noticeable not only as a physical reality  but also as mental and symbolic one.

Patrici Pojada was a full professor at university of Toulouse and nowadays he is a professor of modern History at the university of Perpignan. His researches concern the matter regarding frontiers, both from a political and geopolitical perspective as well as from the point of view of economics, trading and commercial networks and mercantile mobility. In addition, he has investigated the occitan-catalan relations. At the moment, his investigations lead him to the actors of the land and maritime exchanges, such as carriers, drivers or sailors. Among others, it has published Une vallée frontière dans le Grand Siècle. Le Val d'Aran between deux monarchies (1998), Une société marchande. Le commerce et ses acteurs dans les Pyrénées modernes (haut Pays de Foix, vers 1550-1700) (2008), Le Voisin et le Migrant. Hommes et circulations in the modern Pyrénées (16th-19th century) (2011), as well as works on Occitan language and linguistics, including Los vèrbs conjugats (1992) or  Repertòri toponimic de las comunas de Miègjorn-Pirenèus (2009) . He is a member of the language council of the Permanent Congress of the Occitan language and the Aranese Academy of the Occitan language.