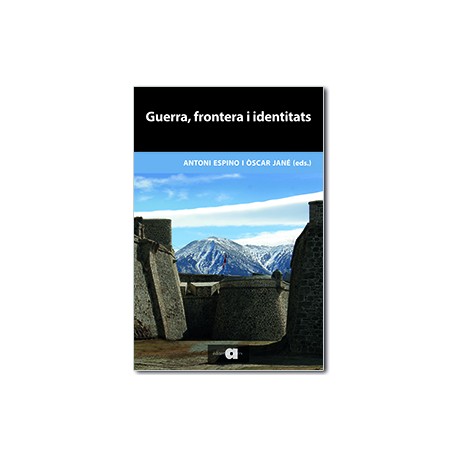 This book analyses issue of war, border and identity. The editors’ aim has been the transversal reflexion of these topics. From Franco-Catalan examples (including Vall d’Aran and Andorra), Hispanic-Portuguese and Italian, the participating authors in this work show the importance of the relations between war and the formation of identities, between the establishing of borders and the multiple effects over the territory, in addition to the evolution of the state’s interests in having control over the neighbouring territories. The authors in the book (Jordi Buyreu, Antonio Espino, Oscar Jané, Miguel Ángel Melón, Patrici Pojada and Antonio Stopani) have a dominion over the topic and they try to give the reader the chance to have a complete vision of the topic despite its complexity. The book is a collective analysis written from concrete and general examples of the issue of war, border and identities. Each one of the topics deserves (and have) monographies and studies. They are, without a doubt, topics of great interest in the Anglo-Saxon historiography of the last years, as in Catalonia, France or Portugal. However, the relation among the three is fundamental in the construction of the political and collective identities in the modern times. For this reason, they have been analysed in eight studies divided in two main blocks. They reflect and analyse the different warfare and border experiences in the Pyrenees and Portugal. Somehow, these experiences of war form territorial and political identities through mechanisms of war. On the other hand, there are several effects that created differences with others: time, war, solidarities, the weight of the border, etc. In this sense, war gave way to new creations, like the case of the border, a new border and a new way of thinking about it and to have influence over it. Therefore, this book, also, offers juxtaposed visions of the territories of Sardinia, Andorra and Vall d’Arán, which were conformed in the Moder Age, in a slow but inexorable process, into what we know nowadays. Now, two studies let us identify the political and social identities from the development of the moder borders of the 19th century: one of them focused in Italy, and the other in the formation of the Franco-Hispanic border formation