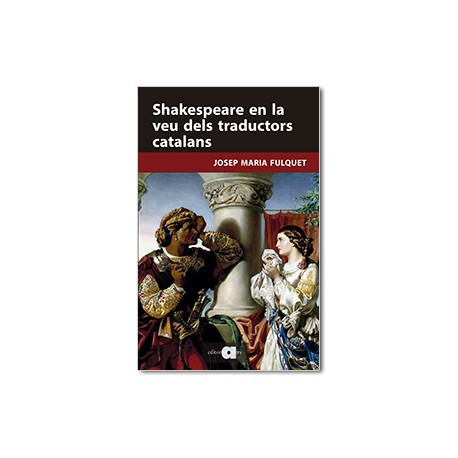 Josep M. Fulquet (Barcelona, 1948) is a doctor in romantic philology and comparative literature. He has close to twenty years working as an educator in university. His trajectory as a poet has been discontinuous. His first two books were: Perillosa riba (1978), with a letter-prologue from Joan Vinyoli, and Platges de Temps (1980). After twenty-six years of silence, in 2007 he published the compilation De Plata Pur. His last book of poems is Morir com un riu (2017), which won the award for Poetry Miquel de Palol in 2016. He has translated poetry, novel and theatre, always under editorial assignment. The Magazine Serra d’Or awarded him in 2000 with the Premio de la Crítica for his translation of Birthday Letter from Ted Hughes.

This book is an inventory of the translations which have been done to Catalan of Shakespeare’s dramatic work, especially of the translation from the 19th and 20th centuries, from the moment Artur Masriera published his version of Hamlet to the appearance of the three volumes of the complete works translated by Salvador Oliva. In the book, the translators are analysed, applying the most relevant methods from the modern traductology, the stylistic, rhetoric, etc., disciplines that help analyse the text examined. It is obvious that the Shakespearean drama and all its deep wisdom have been kept alive all this time. Unlike other literary monuments in occident, Shakespeare’s works have always been performed, without a stop, and they have a considerable repercussion in the media. Either by the name of the actors and their social projection (yesterday it was Enric Borràs, today it could be Enric Majó o Lluís Homar), or by the bold or ground-breaking montage we can see, the fact is that Shakespearean theatre is a phenomenon of survival, the more it’s done the more notable it is. One of the secrets of this long live on a stage is, without a doubt, the translation that each time does and its requirements it has, depending on the language chosen, between the reader. So, the reception of Shakespeare in Catalonia in the voice of his most distinguished translators is a way to perceive the Catalan language and culture of the 19th and 20th centuries, and it helps, too, to understand the aesthetic behaviour’s guidelines of a society.