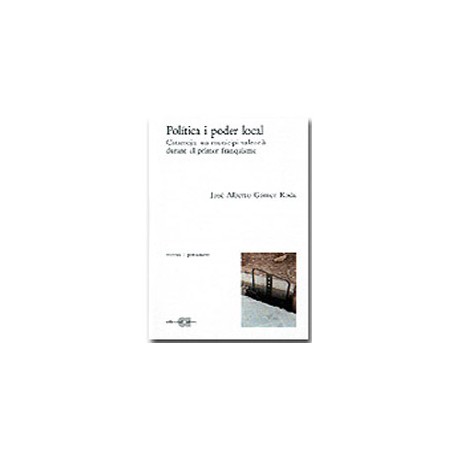 Whoever still doubts the viability of local history for the improvement of our historiography is wrong. As Ismael Saz says in the prologue to Politics and Local Power “a local history ‘well understood’ and a perspective of broad international respite can be articulated to improve our knowledge of a fundamental period of our history in local, national and general fields.’ From this approach, Gómez Roda, expert in German, French and Italian historiography on contemporary dictatorships, undertakes the study of a Valencian town during the first part of Franco’s regime, in particular Catarroja, one of the most important (demographically and economically) of Horta Sud region. To begin with, the author elaborates a chapter in which he compares the mechanisms of the regime’s local powers with those of fascism in general and, especially, with those of the Nazi polycarcy. Then, and after an excursus for WWI and the Civil War, he focuses on the establishment of the dictatorship (1939 – 1943), the long post-war period (1943 – 1950) and the fifties (from the autarky to ‘development), as well as a very valuable annex on the murders in Catarroja during the war. It is, therefore, one of the most interesting and controversial periods in our recent history. A controversy that still splashes us today. In fact, the book, which won the Benvingut Oliver award for historical research 1995 and which was to be published by Catarroja’s town hall, was kept in a dusty drawer of oblivion the day after the elections were won by the self-appointed right-centre party.