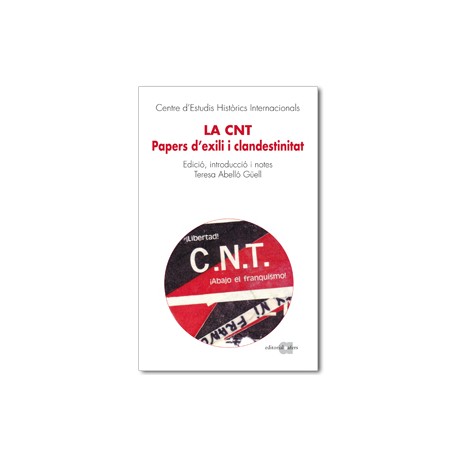 One of the most difficulties found when we want to study the trajectory of the National Confederation of Labour is the one of locating documentation generated by the Union. The historical vicissitudes and the idiosyncrasy of the militants have made this one very scattered or that it has disappeared. This volume of the collection ‘Els papers del pavelló de la república’ offers an approximation to the documentation associated with CNT found in the collection of El Pavelló de la República Library and a sample of its contents. For decades the syndicalism represented the workers’ struggle and in Catalonia led with authority the workers’ association until 1939. The Second Republic, synchronously with the politic and social changes that took place, represented the peak period of the history of the CNT, but during Franco’s regime it entered irreversibly in a phase of numbness. This book makes a review of the CNT history, on the basis of documents produced by the organisation, from the moment in which, lost the war, it had to go underground: its leaders were silenced, and a climate of severe repression was unleashed. Following a chronological axis, the trajectory of the CNT is analysed since, in the midst of the Civil War, its revolutionary program has failed, its decline as a union begins. Since then, resistance and struggle for reorganisation were paralleled to the internal struggles between historical leaders and militancy in exile, on the one hand, and the CNT re-emerged in the interior of Spain that tried to reorganise in clandestinity, on the other. Consequently, the attempts to reorganise in exile and the successive internal crises are treated because of the differences between the CNT of the interior and exterior, the result of the discordant realities that eroded the organisation into the shadow of the past.