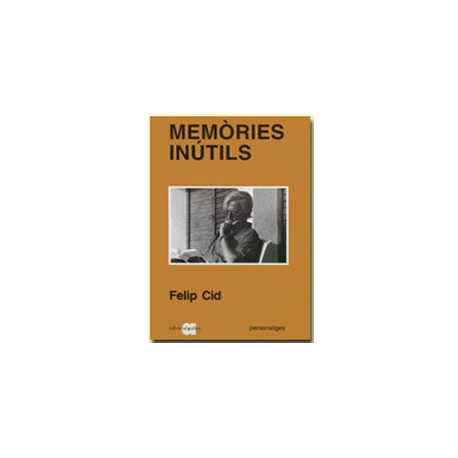 Felipe Cid (Barcelona 1930) is a scholar of Medicine History be the Universitat Autonòmica de Barcelona and he is a pioneer in historical epistemology and medical meseology. In fact, in 1979, he founded in Barcelona the Museu d’Història de la Medicina. Likewise, he is vice-president of the Eurpean Association of Museums of the History of Medial Sciences. From his wide works as a researcher stand out: Història de la Medicina a Catalunya (1969), Breve Historia de las Ciencia Médicas (1978), Medicinai Cirugia de Guerra (1936 – 1939) (1996), etc.. In addition, he is a poet, as we can see in the books Els Sonets del Zoo (1963), Venus i Remors de la Meva Ciutat (1965) and Records d’uns Aparadors (1967). These made him be closely associated with the cultural world in Catalonia during the 50s and 60s when he met prominent personalities of the literature such as Salvador Espriu, Carles Riba, Josep Maria López-Picó, etc. Therefore, his memories, according to him useless, but useful to understand a period of time, are a testimony of one of the most intense periods of 20th century in Catalonia, during the dictatorship. On the other hand, his nonconformist attitude takes him to speak honestly when it comes to talk about certain personalities or situations, sometimes, even he is cruelly sarcastic. Cid, then, in front of the miseries of our country, he doesn’t doubt to give his acid acidic and lucid opinions, the memories of a clairvoyant that helps us understand our most immediate past.