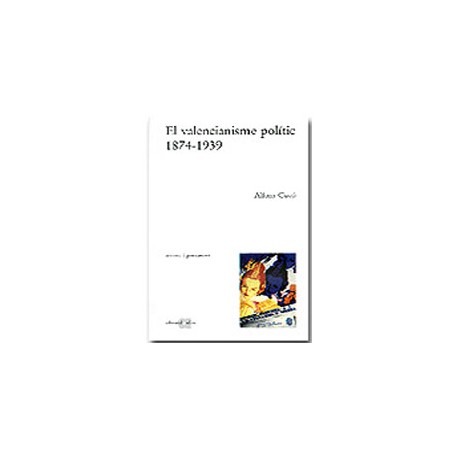 Edited for the first time in 1971, when the lack of freedom hindered the intellectual task and prevented the rigorous treatment of the most recent historical issues and, in particular, the political institutional history of the republican period or the related issue with the national awakening of identity, the book studies the origins of the political Valencianism, from the Renaissance to the preliminary draft of the Statue of Autonomy in July 1931, the conjunction of parties in 1932, the hindering policy of ‘blasquismo’ and the different drafts of the Statue of Autonomy elaborated from the electoral victory of ‘Frente Popular’ until the end of the Civil War. The reissue of the work of Cucó coincides with a particular difficult time for Valencia, when the Spanish neo-regionalism conservatism still maintains the political hegemony, controls the autonomous institutions and, yielding to the pressure of the most ultra groups, it practises a cultural policy which seems to be defined by its anti-Catalanism than by its regionalism. In this state of things, the book of Cucó, allows to see how some of these attitudes do not have anything new and ambience directly with the most rancid of ‘blasquismo’, of the Lo Rat Penat made Spanish and anti-Catalan of Llorente or of the incendiary publishers and of the senseless ‘Las Provincias’ of the beginning of the century. The work begins with a long introduction that revises and updates the political concepts of Valencianism.