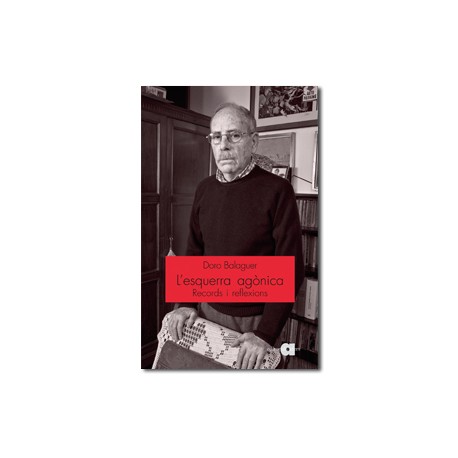 Isidor Balaguer Sanchis —Doro Balaguer (València, 1931)— was born in a family of industrials and sales-men linked to the artistic culture. His father —who was a fan to the painting and music— took part in a very renewing movement that in the 1930s led to initiatives such as the 'Sala Blava', 'Acció d'Art' o the magazine 'Taula de les Lletres Valencianes'. Graduated in Fine Arts, the author of this book lived in Paris for some time and he got to know the most current painting trends of those times. They were practically ignored by the Spanish State and underestimated in the ruling academic setting. He was a member of the 'Parpalló Group' and then he quitted painting. He was for many years a militant of the Spanish Communist Party, and he was a central figure in the Valencian organization.

He was also a member of the central committee and a representative in various democratic coordination bodies during the Transition. He later was the leader of the 'Unitat del Poble Valencià'. He has collaborated in magazines and newspapers. The book contains a very interesting combination between the memory of the author's personal past and his current opinions about a series of issues related to art, politics, nationalism and other matters, as they are developed in the Valencian Country, but also in a geographic and social framework that covers the whole world. It is framed in the memorialistic genre, and therefore all kinds of events and people appear —Ventura, Josep Renau, Joan Fuster, Ricardo Muñoz Suay and also Bush or Putin or José María Aznar and many others. At the same time, it is an essay that collects opinions, answers and observations about the reality of the present and of the immediately preceding periods. They are proposed from a civic perspective and they undoubtedly rise other opinions, answers and observations in the reader while a dialogue tacitly requested by Doro Balaguer to put his on paper is being used.