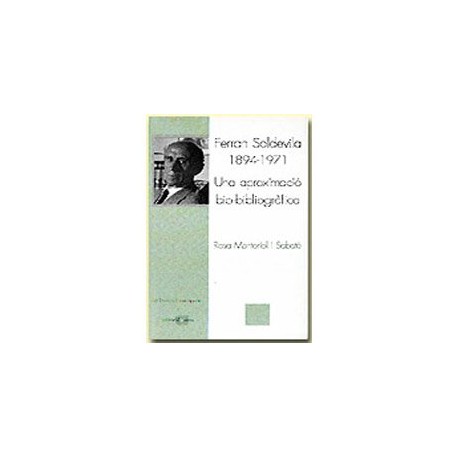 This book, which has more than 1,200 bibliographical references, constitutes an exhaustive inventory of the intellectual production of one of the most illustrious figures in contemporary Catalan culture. In the first place, it allows the reader to follow the path of this historian —who undoubtedly is the most most significant of the so-called “noucentist” school— through a prolific work —monographs, synthesis, articles, conferences  —published by recognized scientific institutions of the country and of a wide European and American geography. The master lines of the life of a democratic intellectual during the most difficult decades of the 20th century are already suggested if you look up at his extensive repertoire of publications. In this sense, the biographical outline that the book includes confirms the importance of the work of a capacious and neat historian who, at the time, was a citizen committed with the freedom of his country. Ferran Soldevila belonged to a generation dashed by the Civil War and exile, even though he had a promising academic career which begun in the 1920s. Because he was expelled from university by Franco's dictatorship, his research and teaching activity had to be developed in the civil institutions that —often from underground— encouraged cultural resistance to the Franco regime. This book undoubtedly contributes to the dissemination of a historiographic and civil contribution that has not always been well-known or valued insofar as it deserves.