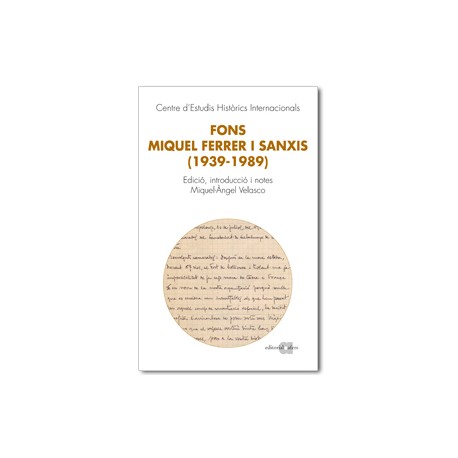 Miquel Ferrer i Sanxis (Castelldefels, 1899 – Barcelona, 1990). Cultural promoter, trade unionist and publicist, adhered to ‘Acció Catalana’, collaborated in the organisation of the Society of Military Studies. Linked to the independentism and with ‘Grup Set’, he participated in actions for which he was locked up in the prison in Alacant (1926 – 1930). He was already free to participate in the creation of the BOC, of which he was secretary of organisation. He was a member of the Central Committee and of the PSUC. When the Civil War broke out, it helped to recognise the UGT of Catalonia, of which it was elected General Secretary in 1937 and he was one of the signatories of Pact of Unity of Action with the CNT. On February 9th, 1939, he moved to France. Under the patronage of the CGT, he organised the service of search of relatives of refugees and, accused or revolutionary, he was interned in the concentration camp of Setfonts and in the castle of Collioure. Expelled from the country, he settled in Mexico and worked in several publishers. He participated in the constitution of MSEC, by the Catalan Socialist Party, of which he was General Secretary. He was one of the promoters of the I National Council Conference, the origin of the Catalan National Council 1953, of which he was General Secretary. In 1965 he returned to Barcelona. The Miquel Ferrer i Sanxis Collection, guarded at the Centre for International Historical Studies of the Pavelló de la República (Barcelona) contains important material to know the birth and becoming of the Catalan community of Mexico and of the ‘Consell Nacional Català’ emanating from the I Catalan National Conference held in Mexico in September 1953, through the documents and letters, issued and received, by the aforementioned bodies which Miquel Ferrer was General Secretary. The legal opinions of the Catalan National Council have been commissioned by prestigious jurists to analyse the decrees signed by Josep Irla (4/21/1954), the origin of the controversial episode that culminated in the election of Josep Tarradellas as president of the Generalitat de Catalunya. The selection of the transcribed documents, fifty personal letters and ten press articles and other writings, has been oriented to divulge the commitment and the thought of Miquel Ferrer on the two questions that permanently, quiet obsessively, concerned and inspired him: the defence of the union action and the defence of the interests of the working class, from a democratic socialist viewpoint; and the recognition of Catalonia (and of the ‘Països Catalans’) within the framework of a confederation agreed equal to the same with the different nationalities that integrate the Spanish state, projected at the European level.