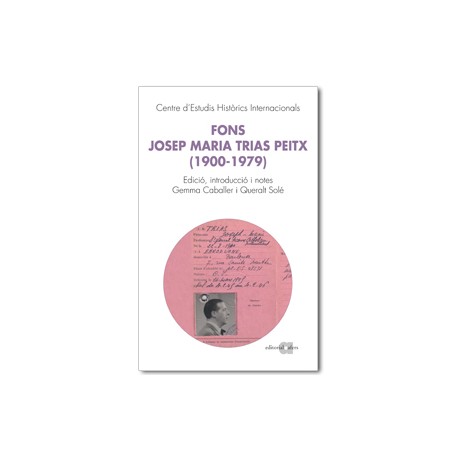 Josep Maria Trias Peitx (Barcelona, 1900 – Prada de Conflent, 1979). As a young man militated in the ‘Comunió Tradicionalista de Barcelona’. At the age of fourteen he went to work at the factory of his maternal grandfather, a task that he combined for a few years with the follow-up of the Boral de Barcelona for El Correo Catalán newspapers, where his father worked, and with the job as a cashier at the Bank of Barcelona. He militated in the ranks of traditionalism until, after the elections to the courts in June 1931, together with other militants, he left. He militated in the Democratic Union of Catalonia (UDC) since its origin, from where it played an important role during the Civil War and his exile to France. In these years they highlighted their actions to save people persecuted for reason of conscience in the rearguard of Catalonia and for the efforts made between the Republic and the Vatican. In the first years of exile he helped thousands of Catalan and Spanish refugees to leave the French refugees camps and intervened, from a self-imposed exile, in the first congress of the Democratic Union of Catalonia after Franco’s dictatorship, held in 1976. He died on the same day of the agreement on the statue which, when approved, opened the doors to the autonomy of Catalonia for which he had fought all his life. This new volume of ‘Els papers del pavelló de la república’ offers an approximation to the interesting personal collection of Josep Maria Trias Peitx, a figure totally unknown until a little while ago, and who took a prominent role during the Spanish Civil war and exile of the years 1936 – 1939. Trias Peitx, who held the position of First General Secretary of the UDC during the Second Republic, carried out an important task of assistance, protection and rescue of people persecuted for reasons of conscience during the Civil War, at the same time that he became a fundamental pillar in the attempt to restore relations between the Spanish Republic and the Holy See. In February 1939, already exiled in France, he became the undisputed leader of an initiative that, according to the calculations of Trias himself, would have managed to extract more than 70,000 Spanish refugees from the French concentration camps: the Catholique d’Aide aus Refugiés de l’Espagne National Committee. Josep Maria Peitx collection is a testimony of the first order of all the humanitarian, politics and cultural initiatives linked to which this fireproof spirit, despite his willing exile to France, Trias was only wanted to return when Catalonia obtained autonomy, it kept him closely linked to his homeland.