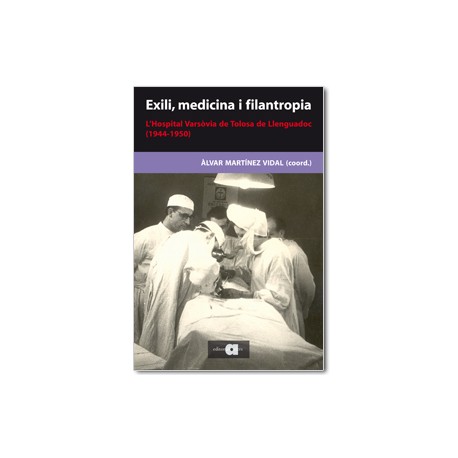 Thanks to the generous subvention of Democratic Memorial of Catalonia, it has been possible to recover the not-before seen sources of the Hospital Varsovia – Walter B. Cannon Memorial, more specifically a film entitled Spain in Exile kept in Andover-Harvard Library in Cambridge (Massachussets). This documental narrates the sad story of the exiled community in France from the most cruelled moments of the withdrawal in the winter of 1939. Filmed in 1946 by American filmmakers, it shows, with shocking scenes, the return of the Spanish survivors from the Nazis camps and the miserable conditions of the exiled in France (the orphans, widows, sick people, the mutilated from the war, etc.) forced to keep their dignity despite years of adversities. In the film, for an American audience, The Hospital Varsovia – the characteristic ‘château, the rooms with the sick inside, the operation theatre during a surgery, etc. – acquires a singular role. The efficiency and professionality of the personnel contrasts with the regrettable facilities and second-hand equipment. The book includes a DVD with the film Spanish in Exile, subtitled in Catalan, Spanish and French, and a copy of the magazine Anales del Hospital Varsovie, published between 1948 and 1950. Of quarterly appearance, this publication (undoubtedly a rarity) is not east to find because there are practically no complete collections. Illustrated with pictures of the time, the book is a mirror of the activities (caring, forming, investigating, disclosures) carried out in the centre. The detention of the sanitary personnel, the morning of the 7 of September in 1950, and the later expulsion of France, in the frame of the ‘Opération Boléro-Paprika’, a combined action between the French gendarmerie and the Spanish and American governments against the foreign communist organisation, meant the end of the Spanish period. Luckly, Dr Joseph Ducuing, one of the most prestigious figures of the French surgery of the time, took immediate charge of the hospital centre and, with the collaboration of a number of medical groups from Toulouse, got stop the closure and assure its continuity. The book addresses a surprising episode and sort of unknown for the international humanitarian help of the refugees from the Spanish Civil War in France: the creation through the liberation of a hospital in Toulouse for the ‘guerrilleros’ wounded in the Operation Reconquest of Spain (October 1944), a care centre set in the rear of the front which soon would become a civil hospital for exiles. With the advances of the allied troops and the liberation of France, the illusion of returning to a democratic Spain seemed an imminent reality. Still, the conditions of the refugees’ lives, after almost ten years of war, were terrible (hunger, illnesses, disabilities, familiar dispersion, orphanhood, etc.). In this context, the humanitarian help, initially offered by North-American charities agencies (the Joint Anti-Fascist Refugee Committee and the Unitarian Service Committee), which were added to other global altruist entities (from Boston to Montevideo and from Zurich to New York) was vital to mitigate the situation of the survivors. To the welfare work – medical and social – developed by selfless personnel, was added an exemplary education and scientific task that in a little time turned Varsovia in a modern hospital, heir of the republican tradition. From the beginning the so-called Varsovia hospital/Walter B. Cannon Memorial (today Hôpital Joseph Ducuing) in the Saint-Cyprien Toulouse, became an emblematic institution to the refugees. Today, it constitutes a ‘lieu de mémoire’ of the Spanish exile to France.